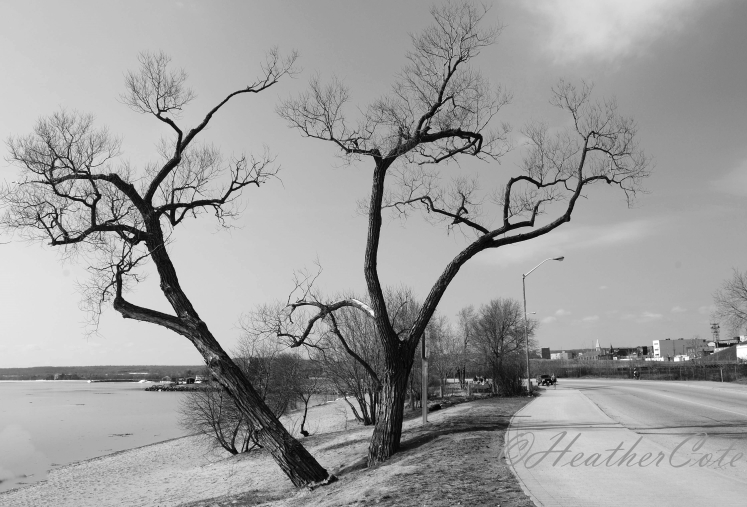 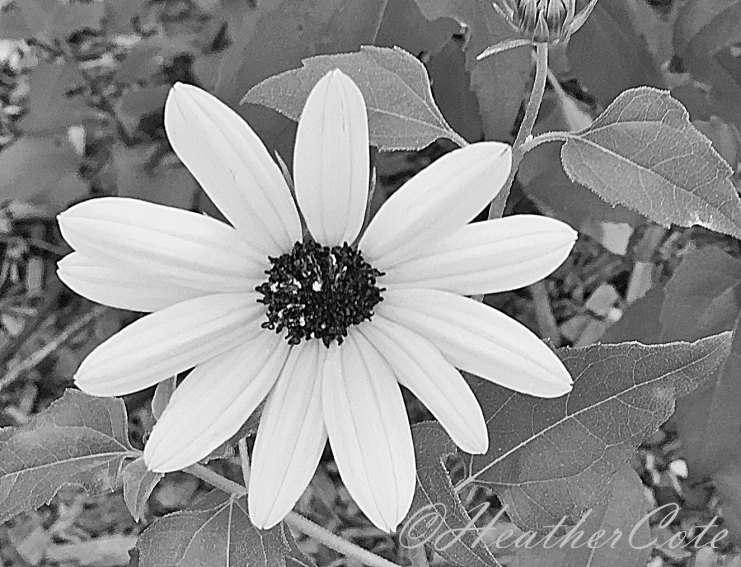 When I took this photo I didn’t see the plane, I saw a speck and thought it was dirt on my iPhone screen…I was interested in the clouds. When I cropped the photo the plane became visible. Fun…

Photo taken while driving…of course I wasn’t the driver… 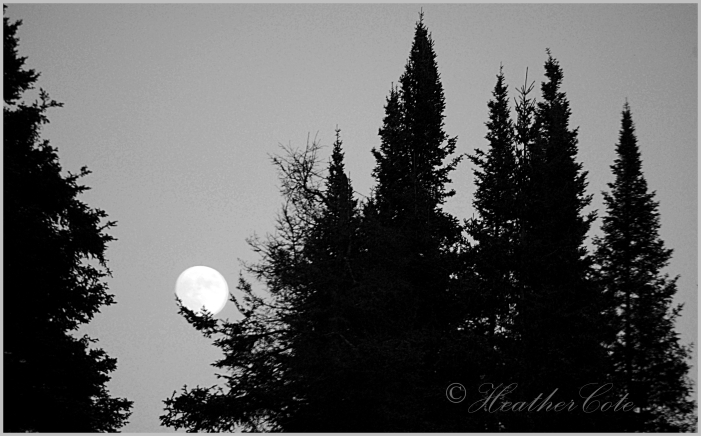 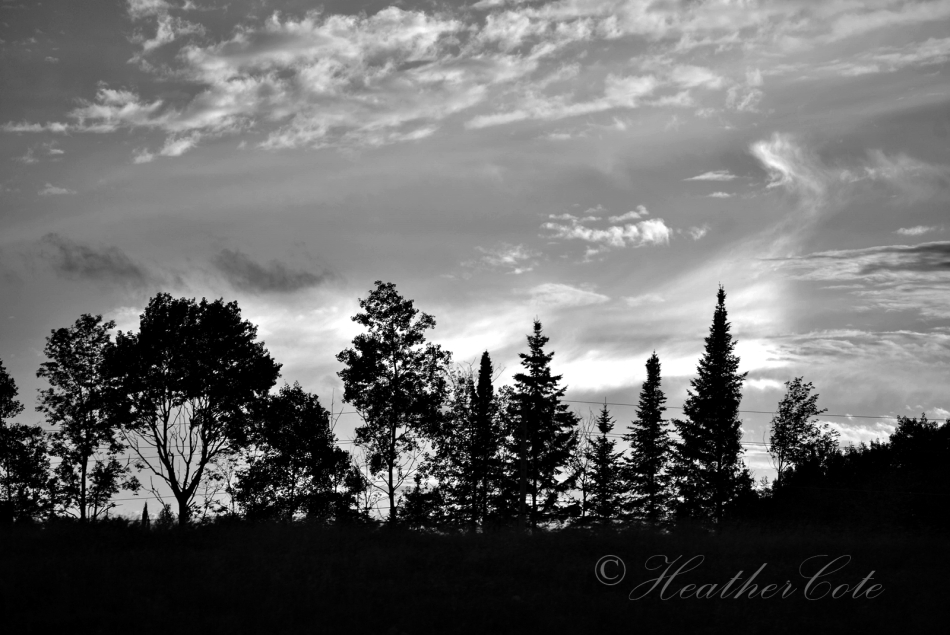 this was taken on the drive home from Florida in 2013, when I began taking photos from the vehicle as we were driving…I’ve always been impressed with the Kentucky landscape, with the rolling hills, fences and gnarly looking trees. 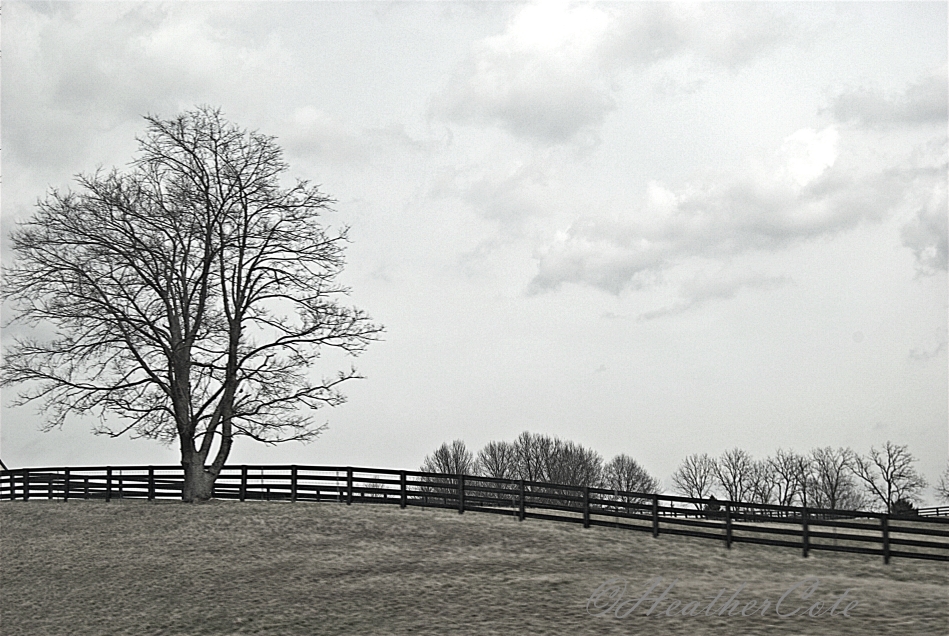 I’ve not taken any photos for a couple of weeks now, which is why I’ve been posting photos I’ve taken in the last year or so…here are three more. 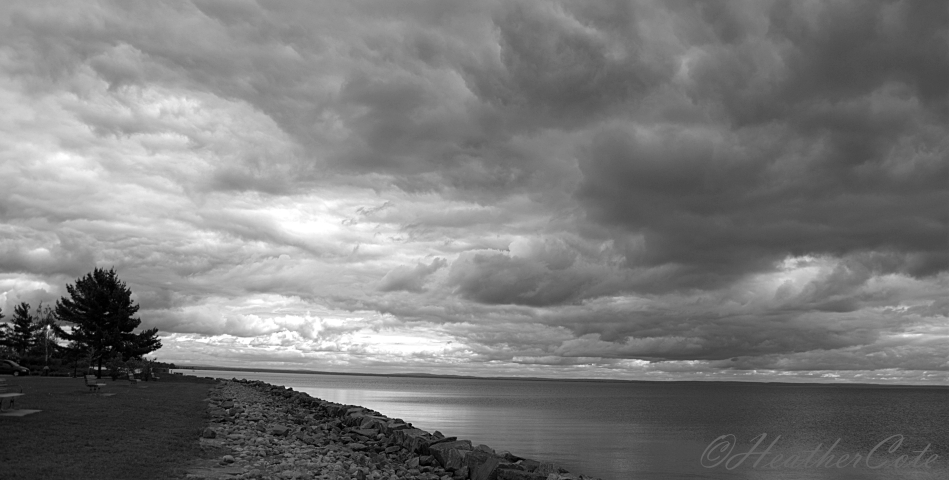 Leesburg, Florida, taken a couple of years ago. 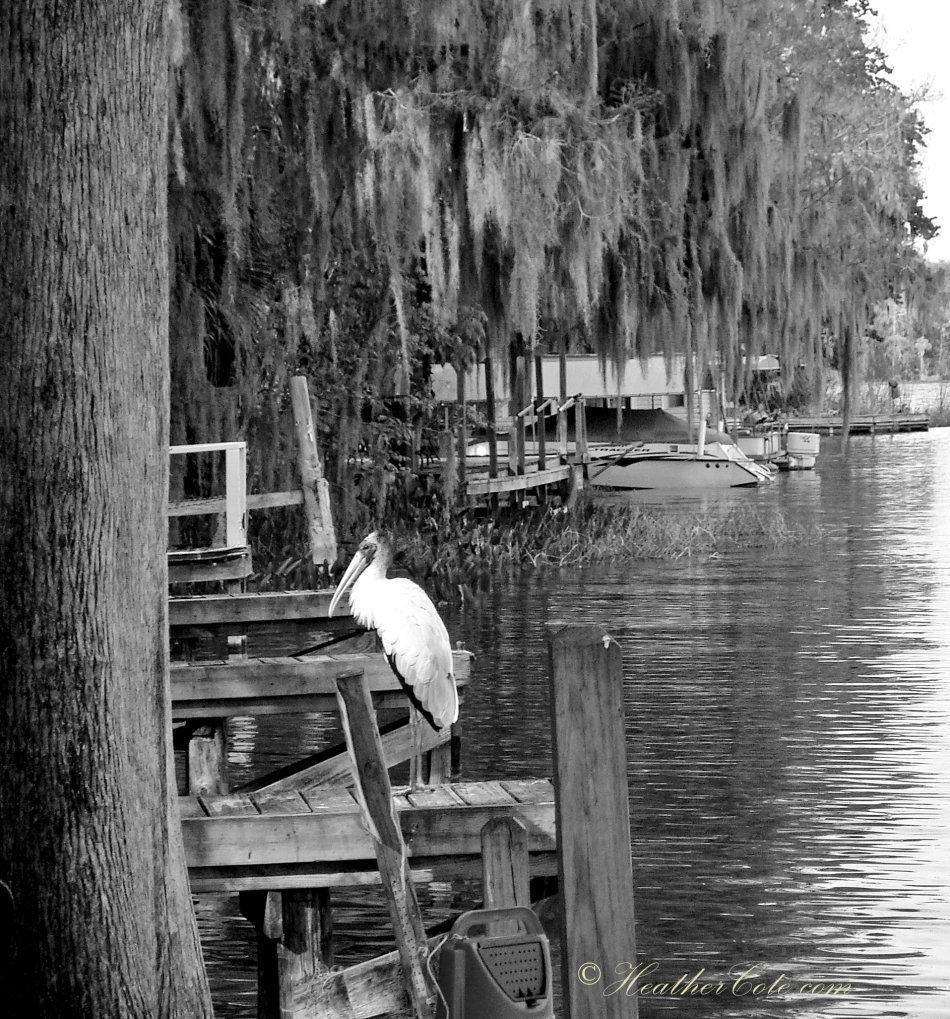 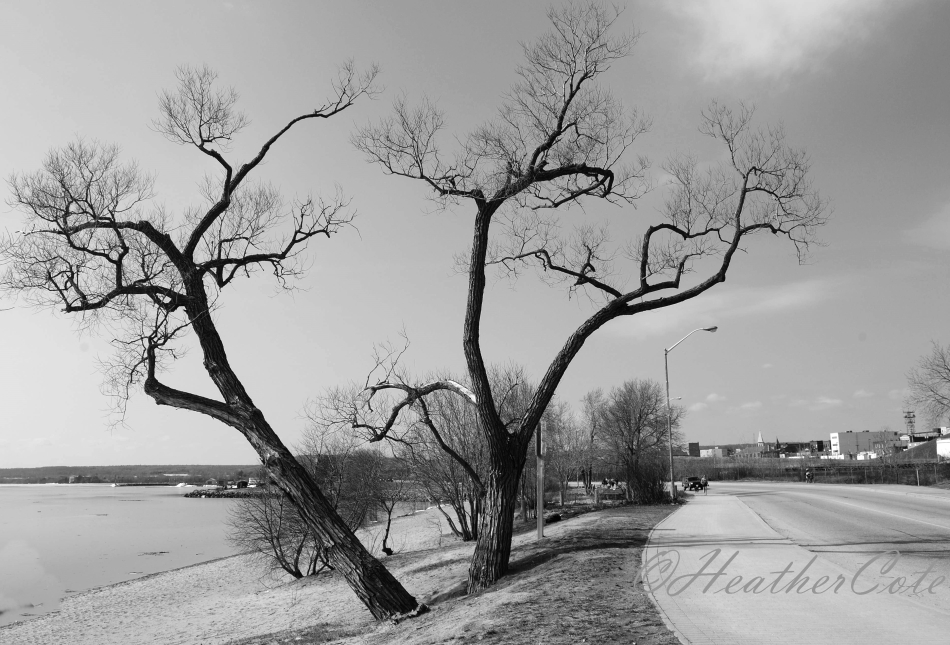 I love flowers, but I’m partial to specific colors, such as purple/mauve and white…maybe that is why I like black & white so much?

By the way…it is snowing here again, we are supposed to get between 10 and 15 cen…or between 4 to 6 inches!  Hence the flowers! 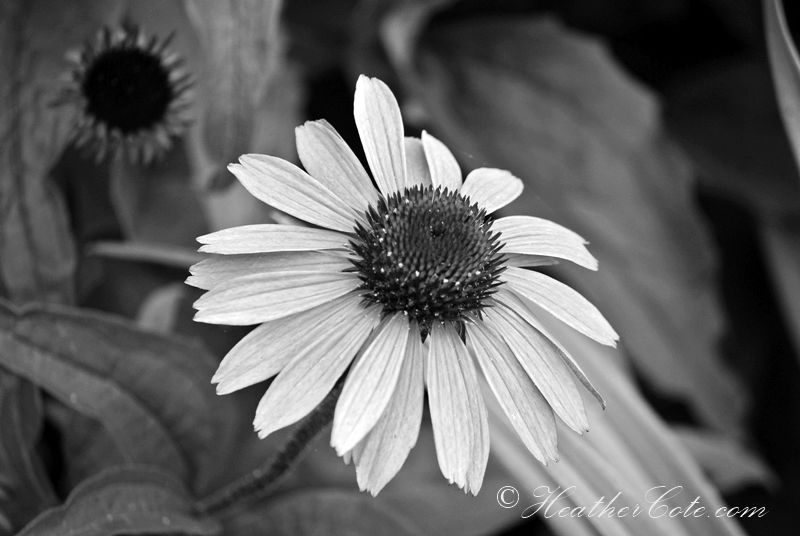 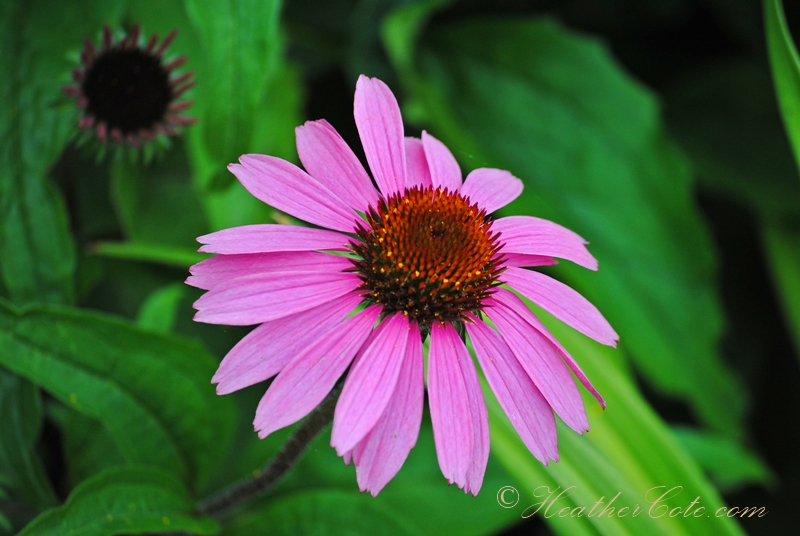 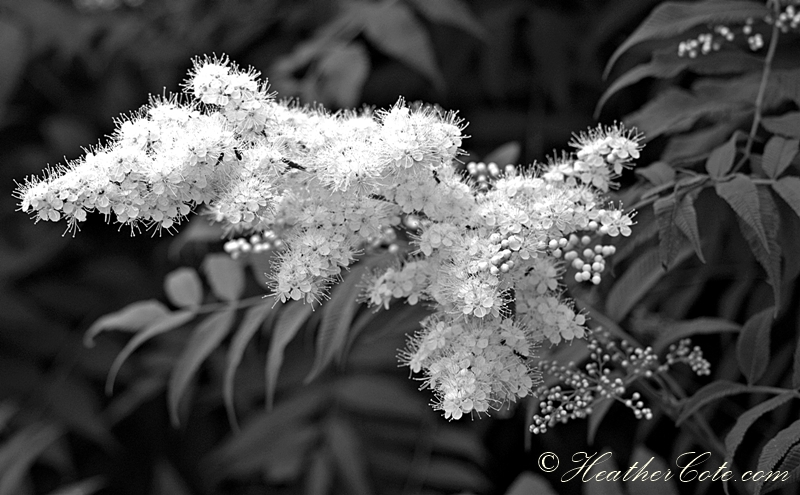 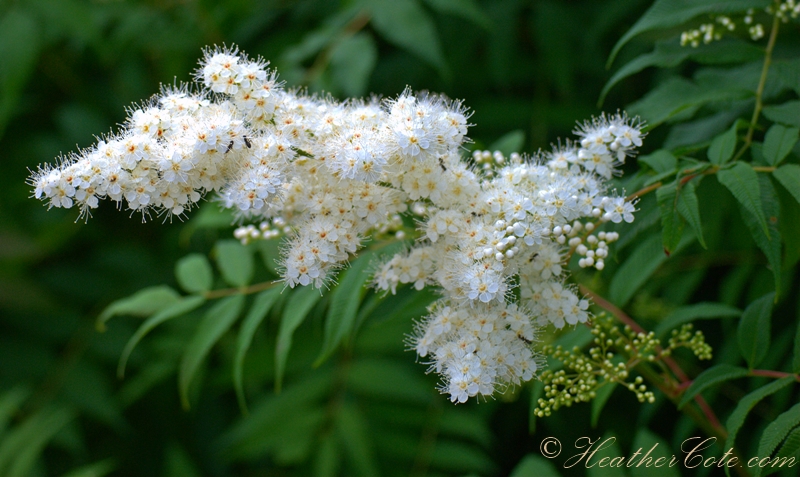 Boring name I know, but I don’t really have a way with words!   I had a difficult time while away trying to capture the sunsets…our condo faced west so I saw one most evenings, but was rarely happy with the photos.   Not sure why, someone said I should have used a tripod and a longer exposure and I’m sure he was correct, I honestly don’t know enough about my camera, at this point, I’m enjoying taking photos but not yet feeling like I want to jump head first  into the workings of the camera.   I couldn’t bring my tripod on the plane, too much to carry…I was with my daughter  so I wasn’t about to take the time to begin reading to find out what to do!

These are the same photos of course…but the colors in the colored are not accurate!  I’m showing one B & W along with its color counterpart simply because even though the color isn’t accurate I like the photo!!!

In the spring, summer and fall this is a beautiful park area beside Lake Nipissing…it is still beautiful but rather stark with the snow…when I was a child this was a busy happening place.  Not so any more, I visit once in a while and there are rarely any people swimming here.  Rather sad actually that such a great park isn’t utilized much…although we have a few that aren’t being used a great deal. 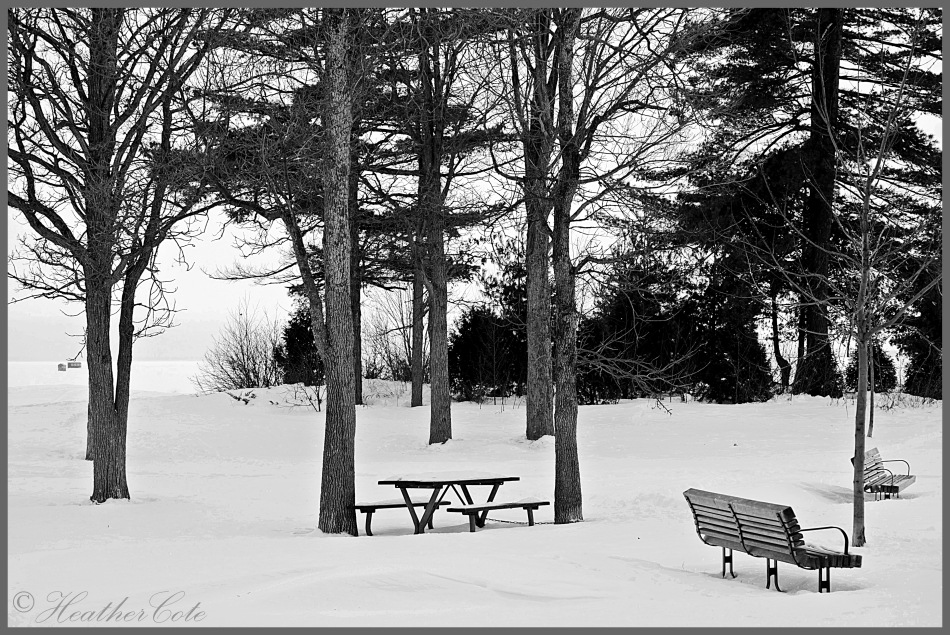 I love the silhouette of branches with out leaves! 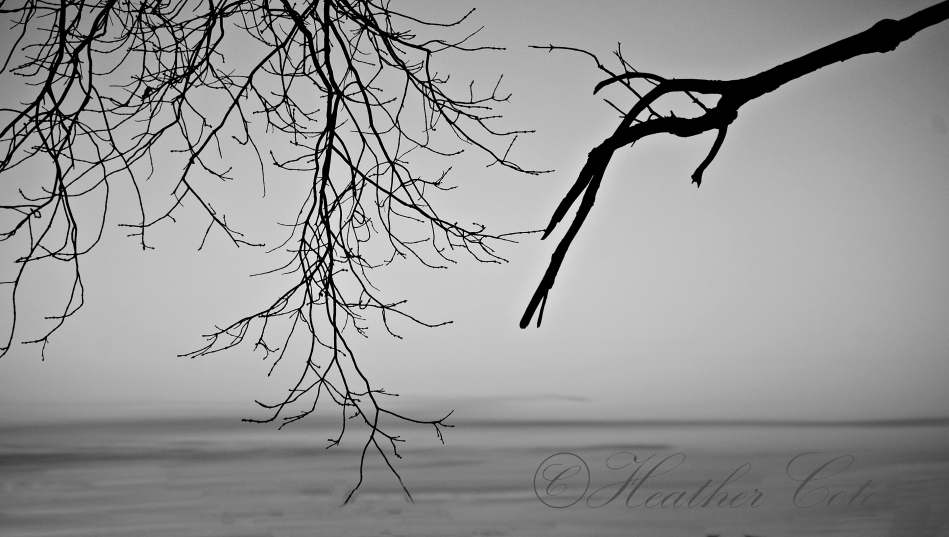 I spotted this yesterday afternoon…not sure what it is all about as I don’t visit this area much…I was up a slight embankment and couldn’t walk down to look at the plaque beside it as the snow was too deep.   I’m thinking it is some kind of beacon, totem pole, but honestly don’t know what or why it is there. I will find out eventually.   The triangular shaped top looks like green glass.   I did it in black & white as some areas of the snow and clouds were just too blue and I couldn’t eliminate it in Photoscape…notice the ridges behind it, they are all along the shore line but the rest of the ice as far as the eye can see looks fairly smooth…I’ve not heard if the ice is safe enough to venture out but I did notice a number of people taking ice huts out so I’m hoping so! 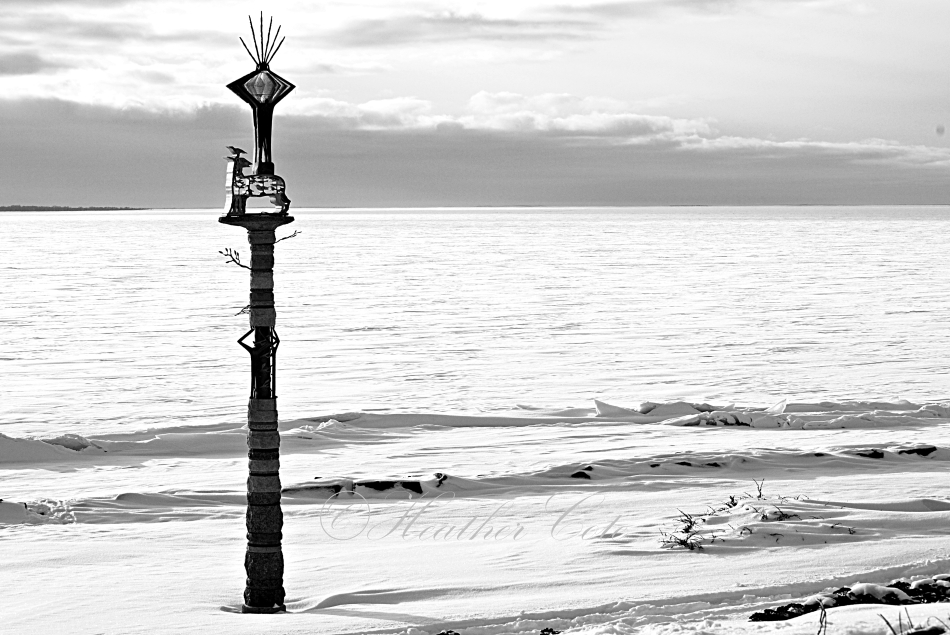 I was trying to take a photo of a  sunrise through the trees when I spotted this fellow…the sunrise isn’t worth posting, but I thought this the bird would be.   I don’t usually do this kind of thing to my photos but felt this photo was worthy…black & white and then in Picasa tried Holga-ish… 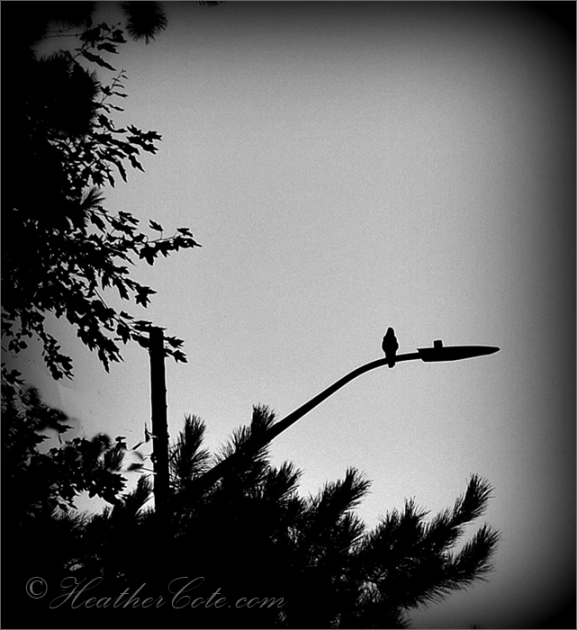 this past Friday was rather foggy on the drive to Rosseau Market..we leave North Bay at 5:00am so on a cooler morning we often see some fog, but this was more than usual…nothing serious though.  fyi…the first two photos were taken from the moving vehicle! 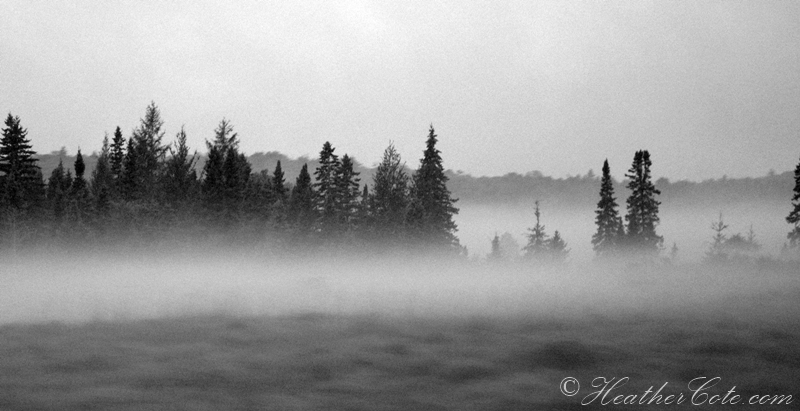 by around 7:00am most of the fog had lifted… 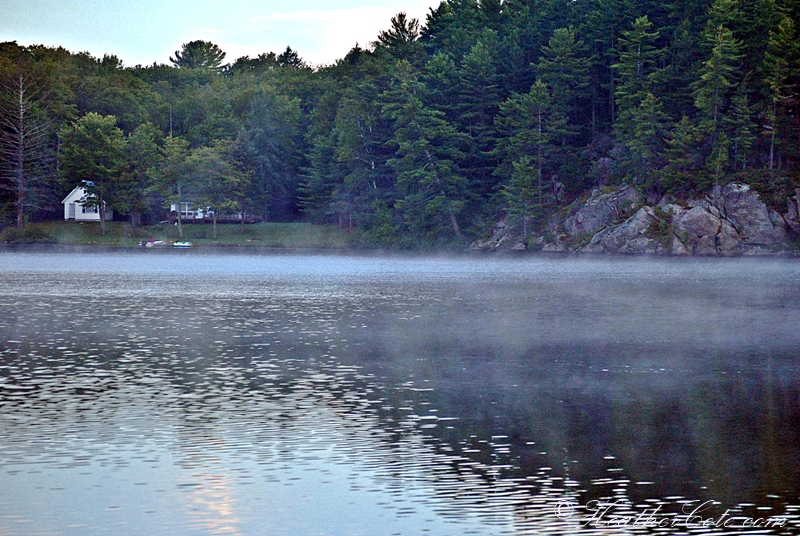 we saw this fellow as we came around a curve…Mr Porcupine…he certainly wasn’t in any hurry to get across the road! 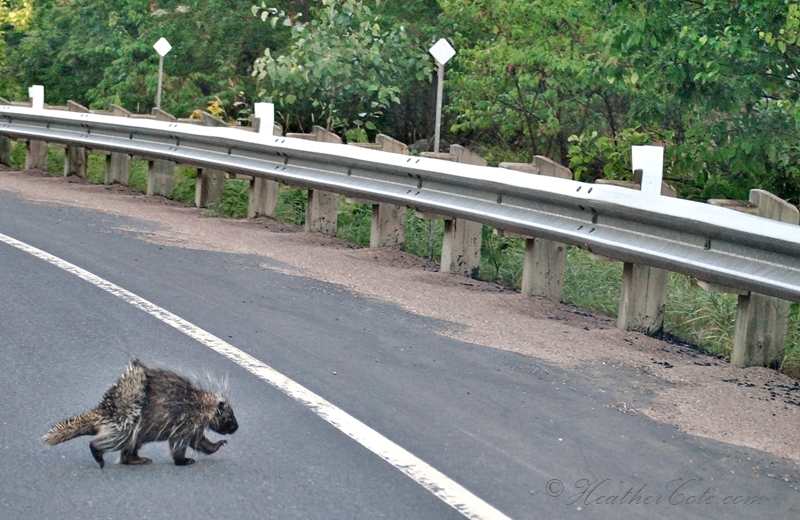 I visit a number of photography blogs and every now and then I’m inspired to try something different with the processing of the photos.   I’m limited to some extent with the programs I have, Photoscape, and Picasa…I also have gimp but I’ve not taken the time to get into it.  recently I”ve seen a few blogs who are using some form of HDR effect, which I rather like so I checked Picasa and it has a setting called HDR-ish…so I gave it a try with a couple of my photos…if you’ve been visiting for awhile you will know I’ve a thing for gnarly, naked trees…the waterfront on Lake Nipissing offers a few great ones due to the very high winds blowing regularly in the area…below is the original photo. 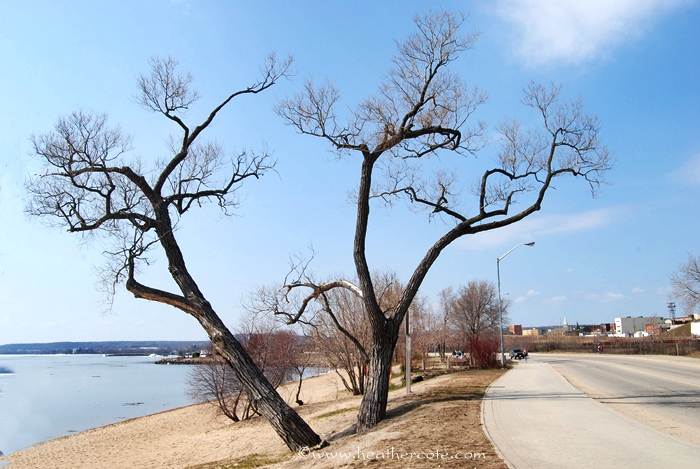 below I’ve used the HDR-ish setting… 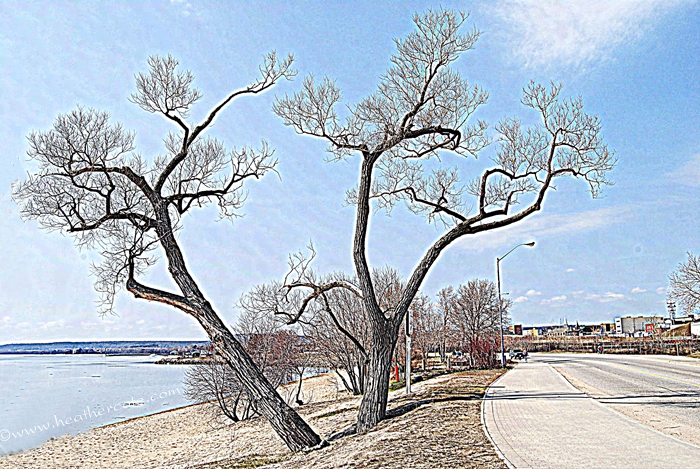 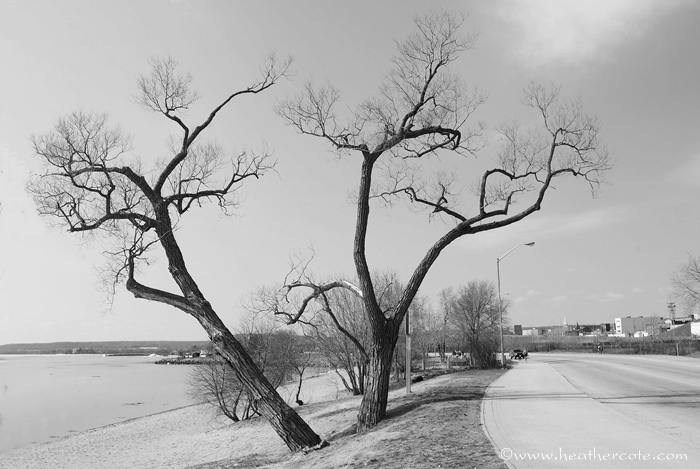 this one is black & white with HDR-ish used… 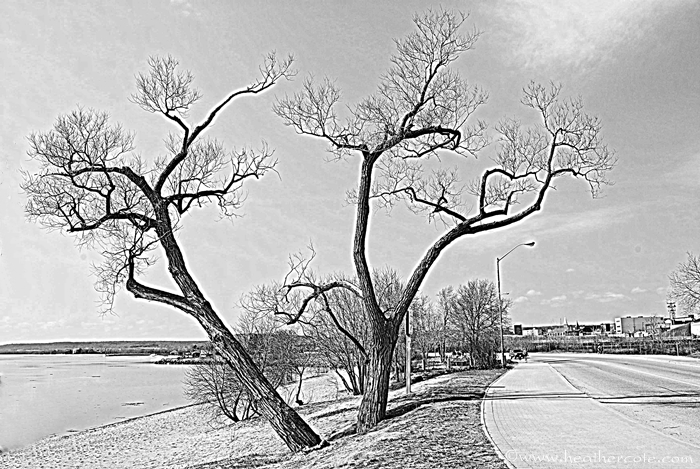